Welcome to the Magnolia Trail Project! 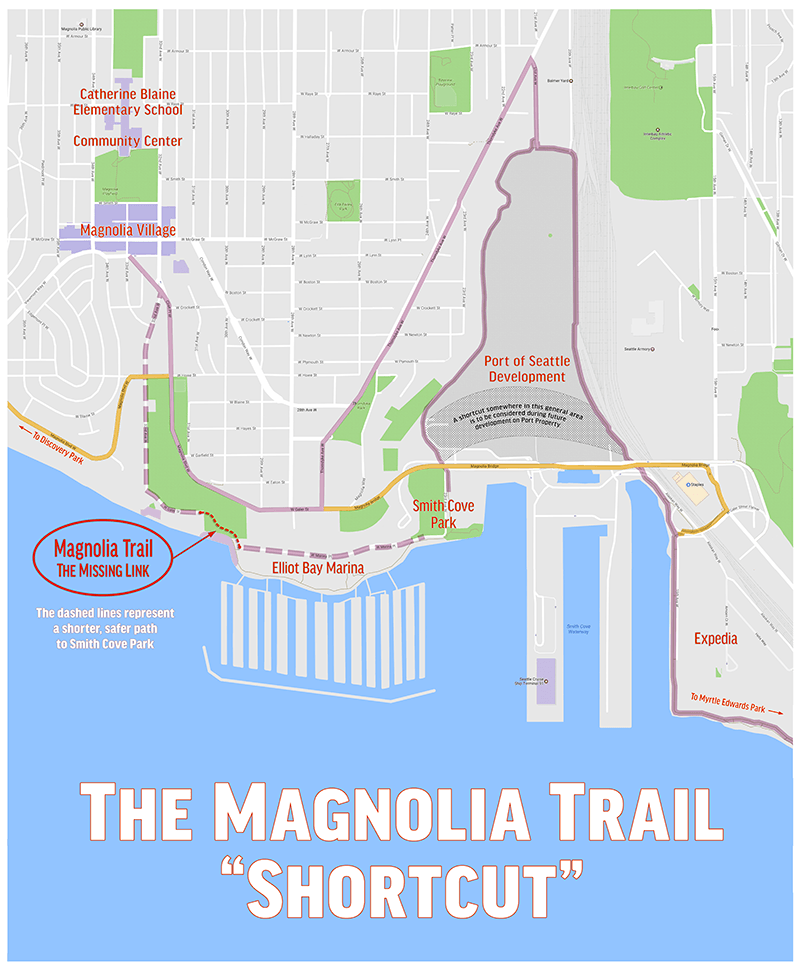 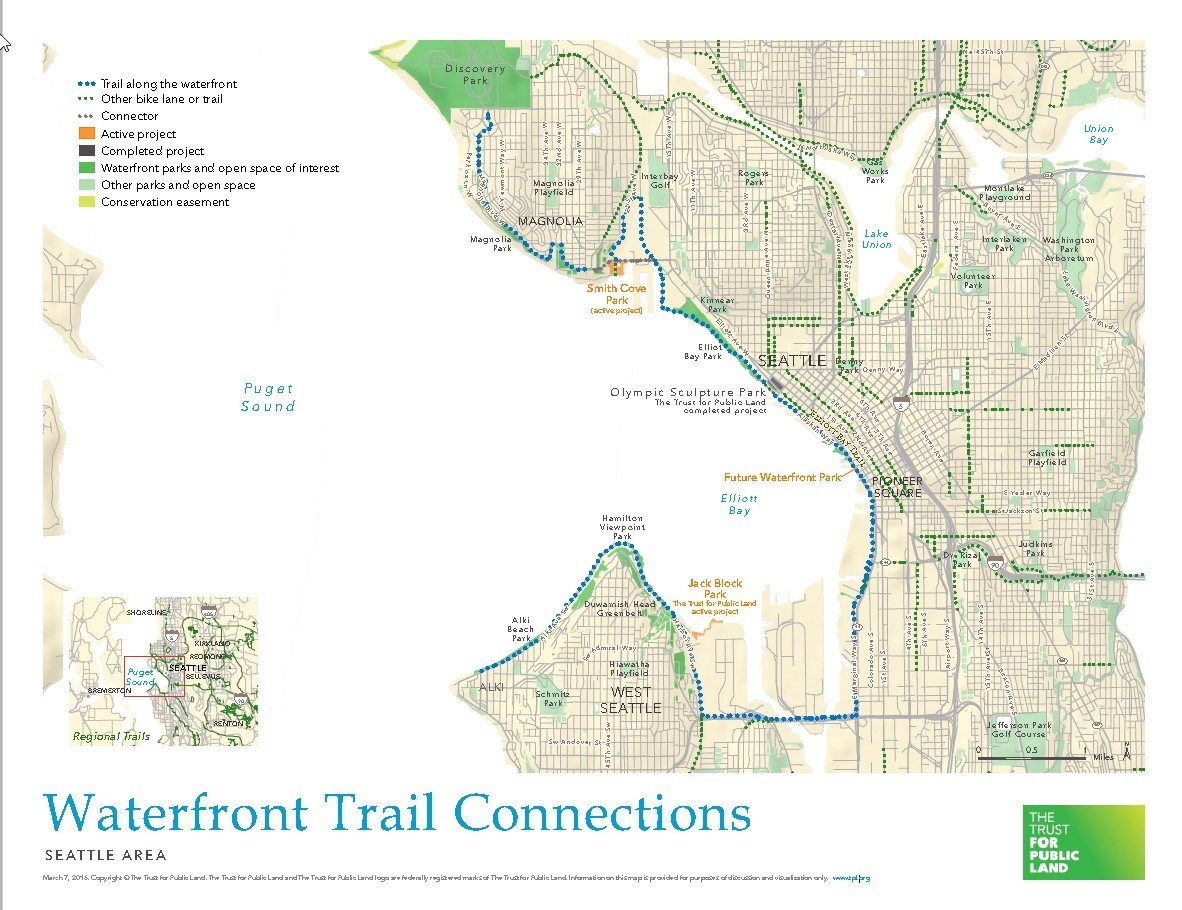 Re: Magnolia Wooden Trestle of 1911: West from 15th Ave West over Railroad Avenue, over Smithâ€™s (Smith) Cove Waterway, South on 23nd Ave West, out on the tidelands, west to West Lee Street, to Logan Ave W, to the uplands connection at 32nd Avenue West.

Note: The Baist Map of 1912 shows the trestle actually running south on 22nd Ave West, not 23rd Ave West, as stated in the City Ordinances.

Background on this area of land: Sometimes called the â€œMagnolia Bluff Parkwayâ€ some of the land included here in the discussion is tied to the Cotterill Bicycle Path of 1900, the Olmsted Boulevard Plan of 1903, 1908, the re-design of the Magnolia Boulevard by Samuel C Lancaster in 1910, desires of the Park Board, Magnolia developers of the time, the proposed Bogue Plan for Seattle of 1911 (that was failed by voters in May 1912), economic factors and wrangling over property that James W Clise owned, 32nd Ave West in particular, which is not part of the Boulevard Plan except as parkland.

The first evidence of the â€œbuiltâ€ trestle comes in an article in the Seattle Times May 6, 1911 which states the â€œnewly completed trestleâ€ is waiting for its 32nd Ave West upland connection; and, James W Clise has finally agreed to give the land.

Department of Resources has photos of the trestle and documents showing the tidelands it was built on; and, has records that the tidelands were leased by them to individuals RD Robinson and JD Farrell; and, Seattle and International Railway for â€œnavigational and commerce purposesâ€. The documents also report that there was a plan submitted for 3 wharves with building specifications included in request. I could not in the time allotted establish a connection between these parties and the City which appears to have built the trestle in question.

32nd Avenue West, as a connection from the wooden trestle into Pleasant Valley, became the source of argument with the Park Board trying to get Clise to donate the land. Clise had declined an early offer from the Park Board (recorded in Park Board Minutes of October 11, 1909) for $50,000. In Park Board minutes of April 25, 1910 David Eastman, developer of Magnolia property, proposes to the Park Board that a condemnation process be begun. The suit is filed. September 26, 1910 Clise asks the Park Board to survey the proposed condemnation land. They agree to do it. On October 24, 1910 it is reported in the Park Board minutes this has been accomplished. On April 24, 1911 Park Board meets with Clise. â€œClise asks a committee be proposed to agree on a reasonable price which he would accept as a stipulated verdict in the condemnation case to come to trail in Juneâ€¦â€ Committee is formed. April 28, 1911 Park Board meets w Clise in Executive Session- no progress reported. May 2, 1911 the Park Board asks for a strip of land 150 wide for Boulevard purposesâ€¦â€ (Again, this land is not included in the Boulevard Path, which is always north of the ravineâ€¦then over Howe Street when it is a wooden trestle and then a concrete bridge.) May 5, 1911 the Park Board receives a letter from Clise saying he will give 150 foot strip, west of Wolf (Wolfe) Creek Ravine. They accept. Condemnation case goes forward; but, is dropped as of Park Board Minutes July 7, 1911. July 14, 1911 Clise objects to a clause in agreement of property transfer and Park Board drops it out of agreement. Not until January 19, 1912 is the Park Board authorizing clearing and grubbing of all Boulevard property including 32nd Ave West piece.

It appears to me there is time-lag and confusion and ultimately inaction on 32nd Ave West for several years because of different government entities, legal cases, lawyers at work, the wrangling of Clise over the property and ultimately the City/Park Board not moving forward â€œin a timely mannerâ€, as David Eastman regularly appears before them to say. This appears to be, in part, because Magnolia is not developing as hoped by City businessmen and developers. The only connection at this time was Grand Boulevard (now Dravus).

According to the Engineers in the Seattle Engineering Vault work was first commenced on 32nd Avenue West in November 1915 and final inspection takes place in February 1917. By this time, the wooden trestle is having some problems with teredos (shipworms that bored into the wood) weakening the timbers. Some of the wooden piles are fixed approximately in 1916; but, by 1919 more damage was incurred and the trestle was condemned, although foot traffic is allowed.

On April 15, 1920, according to the Seattle Times: 1,500 feet of the trestle suddenly collapsed. And, 600 more feet collapsed the following day, virtually taking the majority of the trestle down. The article quotes Charles R Case, superintendent of streets, as saying: â€œThere is little likelihood of the bridge being rebuiltâ€¦It was built originally at the behest of certain real estate interests and the Chamber of Commerce which hoped for certain industrial developments in that part of the city which failed to materialize.â€ A Port of Seattle photo circa 1920 confirms that almost all of the part surrounding Magnolia Bluff (excepting a small piece on 22nd Avenue West going south) is now gone.

Conclusion: All evidence I found points to the envisioned use of 32nd Avenue West as a street for commerce and commercial purposes connected with navigational uses, be it: wharves, a ferry landing, or a coal deposit network, all mentioned in various documents I researched, with eventual ties to Smithâ€™s Cove or Pleasant Valley land. It is never part of the Boulevard Path or used as part of the bicycle path of 1900 or the driving tour of 1917, I found. Most documents refer only to â€œthe west side of Wolf Creekâ€ when talking of the 32nd Avenue property in question as being used as a connector/connecting street. There is no talk of the east part of 32nd Avenue West as anything other than â€œparklandâ€ that I could find.

US Coast and Geodetic Map 1918

Port of Seattle Photo circa 1920 www.portofseattle100.org